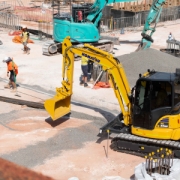 Construction of Charles Darwin University’s (CDU) new $250 million education and community precinct is on track to achieve a major milestone before the wet season, with the pouring of the basement slab nearing completion.

The project in Darwin’s CBD is the centrepiece of the Darwin City Deal and is a partnership between the Australian and Northern Territory governments and Charles Darwin University (CDU).

Territory company Halikos was recently awarded the contract for the construction and fit-out of the main building and the landscaping of the public areas.

Pouring of the 2,700 cubic metre slab, which forms the base of the two-level underground carpark, has been undertaken in 12 sections and began in October 2021. The sealing of the bottom of the excavation with the pouring of the slab reduces the risk presented by the upcoming wet season.

Federal Minister for Communications, Urban Infrastructure, Cities and the Arts, the Hon Paul Fletcher MP, said the project will help diversify the local economy and elevate Darwin’s competitiveness in the international education sector.

“The new Charles Darwin University precinct is the centrepiece of the $320 million Darwin City Deal which is a 10-year plan to position Darwin as a vibrant and liveable tropical city with a diversified economy,” Minister Fletcher said.

“Once complete, this project will have created more than 700 jobs, helped to diversify the local economy and enhanced the culture and vibrancy of the city for future generations.”

Northern Territory Minister for Jobs and Training, the Hon Paul Kirby MLA, said the project was providing a boost to the local economy.

“The slab, and the foundations below it, have involved approximately 388 mixer loads of concrete and 450 tonnes of steel reinforcement – all put in place by Territory businesses,” Minister Kirby said.

“This project will do two things – help define the Territory as a destination for quality training and education, and provide a world-class facility further beautifying our City.”

Federal Senator for the Northern Territory, Dr Sam McMahon, said it was great to see Halikos expanding its staffing levels and actively seeking construction workers to deliver the project.

“The scale of this project will create jobs in a diverse range of local businesses right through to early 2024.”

CDU Vice-Chancellor, Professor Scott Bowman AO, said it was fantastic to see such a major milestone of the project completed.

“The project has come a long way in a short period of time and full credit to Halikos and its subcontractors for the progress made,” Professor Bowman said.

“Once complete, the iconic main building will establish Darwin as a university city and CDU as the University of Northern Australia.”

The new precinct will provide a modern city campus for CDU, a new purpose-built home for the Northern Territory Library and more than 230 underground car parks.

For further information about the Education and Community Precinct, visit educationcommunityprecinct.cdu.edu.au. The Darwin City Deal Implementation Plan can be viewed at infrastructure.gov.au/cities/city-deals/darwin.