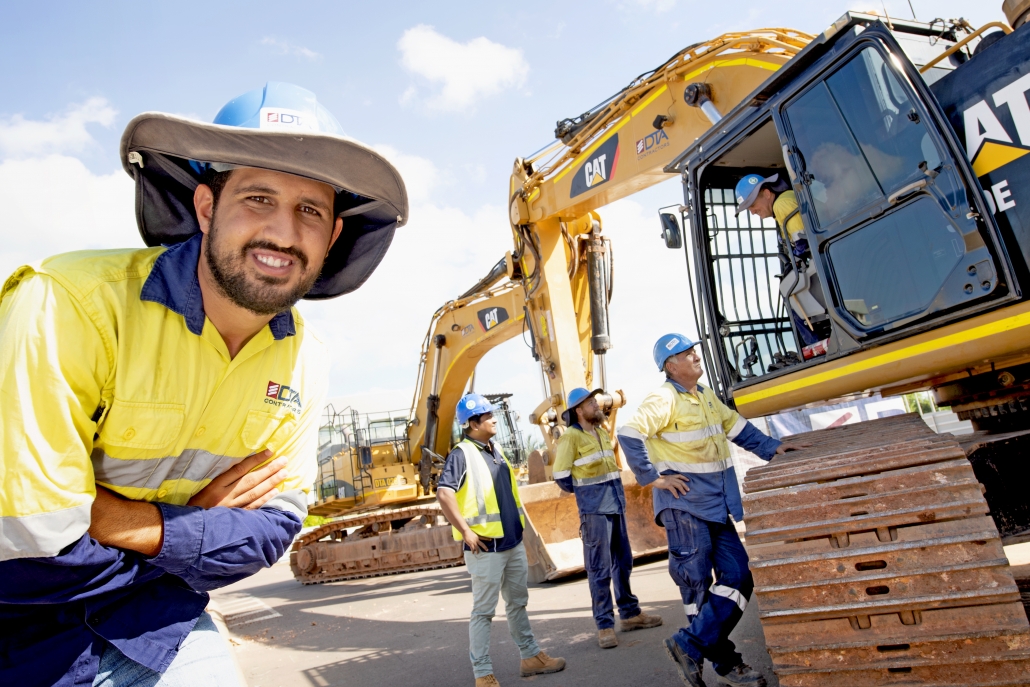 DTA Contractors Site Engineer and CDU Civil Engineering Honours graduate, Mo Alsaleh with the DTA team about to start excavation for the Education and Community Precinct on Cavenagh Street. The precinct will create 350 on-site jobs and 380 jobs across the economy.

The announcement means that construction of the $250 million Education and Community Precinct will soon kick off.

DTA contractors will be responsible for excavation of the building’s two-level basement on the Cavenagh Street site.

The centrepiece of the Darwin City Deal, the precinct will include state-of-the-art teaching and research facilities, while also housing an art gallery and library.

Federal Minister for Population, Cities and Urban Infrastructure Alan Tudge said sourcing local expertise was critical for the project and for the NT economy.

“Providing job opportunities to locals in the construction field, such as architects and building engineers, was a top priority,” Mr Tudge said.

Chief Minister of the Northern Territory Michael Gunner said this was part of the Territory’s jobs-led recovery from the coronavirus crisis.

“This project will make 730 jobs available during construction and create an estimated 54 ongoing jobs every year. The excavation itself will see a peak of 18 contractors working on site, with all sub-contracts needing to be locally sourced,” Mr Gunner said.

“This facility is expected to boost the Darwin economy by $600 million over a 30-year period, keeping local businesses working and cash flowing in the community.”

Senator for the Northern Territory Dr Sam McMahon said the project was on track.

“Excavation is expected to start in mid-October once the necessary approvals have been obtained,” Senator McMahon said.

“We expect the excavation will take about four months to complete once underway.”

“The precinct is an investment in creating the standard of facilities that make studying at CDU attractive to Territorians, students from other parts of Australia and from overseas,” Mrs Parry said.

“If CDU is to grow and continue to offer the chance for Territorians to pursue further education, and to realise the opportunities that this growth creates, CDU needs to be able to offer not only the teaching students require, but also the learning experience and facilities they expect.

“The new Precinct meets the needs of students who want to be able to work, learn and earn in one location. The new facility will also benefit part time students, many of whom work in the city, in juggling the demands of work and study.”

DTA will be required to manage the trees onsite and ensure compliance with the Tree Protection Plan and mandatory liaison with the dedicated site arborist.

DTA will also ensure waste is identified and disposed of in accordance with the relevant regulations and implement the necessary storm water and traffic management plans.