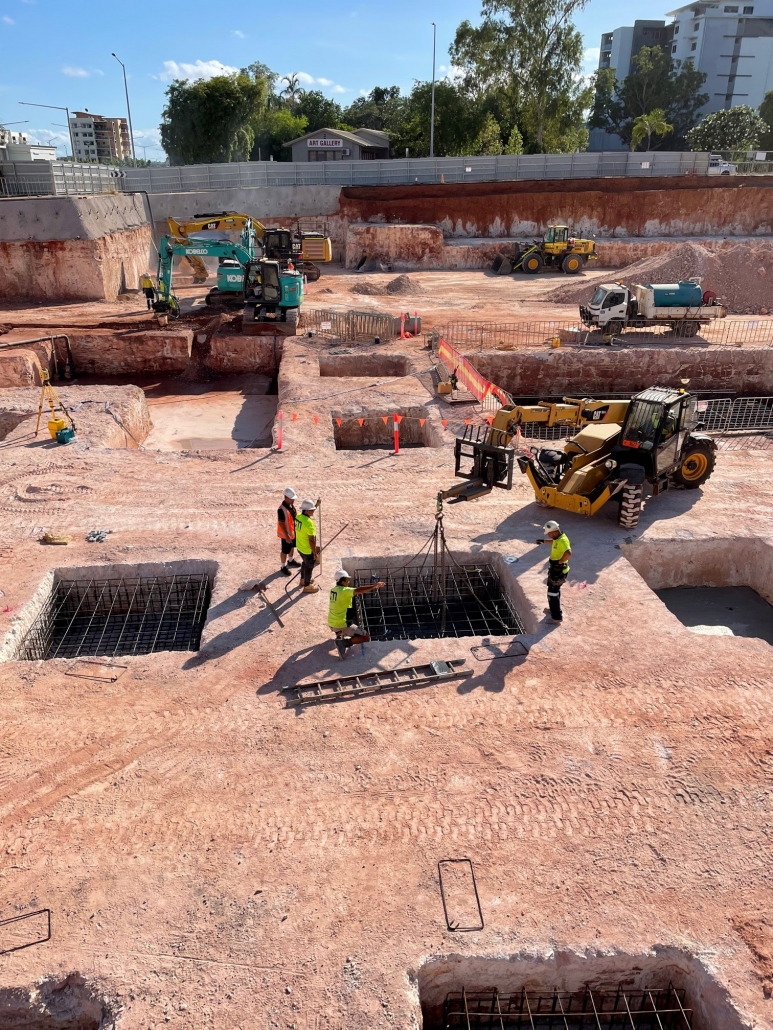 Footings for the Education and Community Precinct under construction.

The Northern Australia Infrastructure Facility (NAIF) is pleased to confirm its loan to fund the construction of Charles Darwin University’s (CDU) new Education and Community Precinct has reached financial close.

The loan funding is in addition to the $97.3 million commitment by the Government towards the project, which has already secured the development approvals needed for construction to start, meaning shovels can hit dirt on the project this year.

Minister for Northern Australia David Littleproud said this project will proceed with thanks to the NAIF loan.

“Now there will be jobs coming to Darwin with all the follow on to local economy,” Minister Littleproud said.

“At the end of the day, there will be a first-class education facility that will attract the best and brightest, for research and development for business and industry in Darwin.

“This is exactly the type of transformational project the NAIF is backing right across the north, with $3.1 billion already committed to 26 projects.

“Not only will these projects increase local amenity and opportunities for communities, they are expected to inject $15 billion into the economy and create more than 10,000 construction and ongoing jobs – providing a boost to northern Australia and its economy.”

Minister for Communications, Urban Infrastructure, Cities and the Arts Paul Fletcher said the new precinct is a significant infrastructure project that will help create jobs and support local businesses.

“The new CDU precinct is the centrepiece of the Darwin City Deal, which is helping to position Darwin as a vibrant and liveable tropical city with a strong and diversified economy,” Minister Fletcher said.

“This precinct will deliver state-of-the-art teaching and research facilities, an art gallery and library that will transform the Territory’s education sector and open up opportunities for the broader community.”

Senator for the Northern Territory Dr Sam McMahon said the precinct will be a lasting legacy that brings in more students and professionals while encouraging new investments, local business and more activity in the Territory’s capital.

“I look forward to seeing shovels hit the ground in the coming months, with construction expected to create 730 much-needed jobs and the project to inject $600 million back into the Territory economy,” Dr McMahon said.

“CDU is helping to grow our own talent and drive a stronger, more diversified northern Australia economy,” Senator McDonald.

Construction is expected to be completed in the first quarter of 2024, with CDU able to draw on the loan funds to support construction milestones.

The final design of the Education and Community Precinct was released late August 2021, and can be viewed at: educationcommunityprecinct.cdu.edu.au.

NAIF has made financing commitments of $3.1 billion to projects in northern Australia. These projects are forecast to generate more than $15 billion in economic impact and support more than 10,000 jobs (during construction and operations).

In the Northern Territory, NAIF has approved $711 million of financing to projects, which are forecast to support more than 3,000 jobs.

NAIF CEO Chris Wade said: “NAIF has worked closely with CDU over a number of years and we are delighted that our investment has now closed and can be drawn as required. The new precinct is the centrepiece of the Darwin City Deal which will provide a modern city campus and support future jobs, education, new investment and future research.”

“It is great to see the progress already made on site to date and we look forward to seeing the campus rise from the ground in the coming months.”