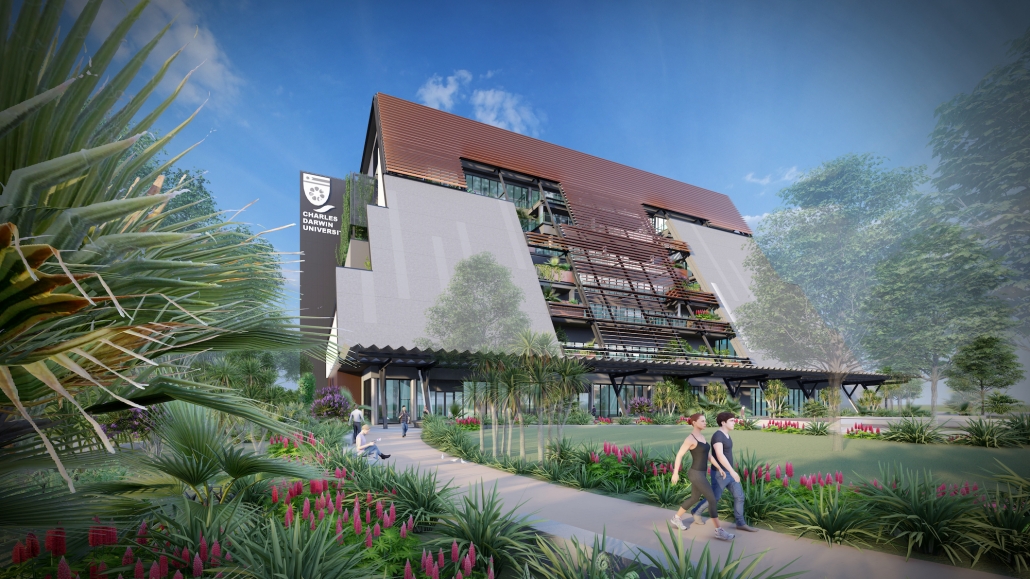 Final designs for Charles Darwin University’s (CDU) new Education and Community Precinct have been unveiled with final approvals now in place and construction set to start.

The $250 million project is the centrepiece of the Darwin City Deal and is a partnership of the Australian and Northern Territory governments and Charles Darwin University.

The project received conditional development approval in July last year and has now received the green light to proceed to construction.

Federal Minister for Communications, Urban Infrastructure, Cities and the Arts, the Hon Paul Fletcher MP, said the new precinct would provide a modern city campus for CDU, and a new purpose-built home for the Northern Territory Library and event spaces.

“This is a significant project for Darwin and the centrepiece of the $320 million Darwin City Deal, which is a 10-year plan to position Darwin as a vibrant and liveable tropical city with a diversified economy,” Minister Fletcher said.

“The Morrison Government has committed $97.3 million towards the new campus, which will include state-of-the-art teaching and research facilities, an art gallery and library that will be enjoyed by the local community and help boost Darwin’s competitiveness in the international education sector.”

The design features a striking facade designed to provide the best solar access to the heritage-listed Boab Tree on site, green wall elements and will host Northern Territory and CDU Libraries and the university’s Art Gallery.

The Boab Tree is the focal point of the design, creating a new public gathering space for the people of Darwin. The design caters to the Boab, with a sloping façade to ensure the tree is not overshadowed and gets enough sunlight, supporting the continued long life of this special city landmark.

The façade design by the Precinct’s architects, MODE, features a variety of landscaped terraces and sunshades as well as an old Darwin favourite – louvres – to best manage the heat load. These features manage the reflection off the building while maximising light and views inside.

“This Precinct is the centrepiece of the Darwin City Deal and forecast to inject $600 million into our economy, with the construction phase delivering 730 jobs,” Minister Kirby said.

“We want to boost the number of visitors coming into our CBD and this Precinct will also offer innovative learning areas, 232 underground car parking spaces, landscaped green space and the ability to support pop up community activities such as food trucks and events.”

Federal Senator for the Northern Territory, Dr Sam McMahon, said the new education and community precinct will attract students and business to the city centre.

“The precinct will integrate education and community facilities, as well as commercial and public spaces,” Senator McMahon said.

“Halikos has had workers on site since the start of the week in order to get as much work completed to avoid any further delays due to the wet season. As a result of this construction and other Federal Government work, Halikos is also now looking to expand its current staffing levels and is actively seeking more construction workers. This type of project creates jobs to keep our economy going in these times.”

The project team took the public feedback on the original design on board and spent many hours refining the design and addressing issues ranging from stormwater runoff to the aesthetics of the façade.

“This new campus will be the jewel in the revitalised Education and Community Precinct – supporting future jobs, education, new investment and future research,” Professor Bowman said.

“Being at the centre of this new precinct will help Charles Darwin University train and educate more Territorians – helping them get the skills and experiences they need to thrive in their local communities.”

The project team has collaborated with Darwin City Deal’s CSIRO Darwin Living Lab, another Darwin City Deal initiative, to make the building as energy efficient as possible and to ensure it is liveable and resilient in the face of Darwin’s hot climate.

National and international sustainability rating systems have been used by the design team for benchmarking to inform the selection of sustainability initiatives for the project.

Once complete at the end of 2023, the Precinct will house CDU’s Asia Pacific College of Business and Law, the College of Indigenous Futures, Education and the Arts, IT teaching, the university’s International College and Art Gallery.

The final design of the Education and Community Precinct can be viewed at: educationcommunityprecinct.cdu.edu.au.

The Darwin City Deal Implementation Plan can be viewed at: infrastructure.gov.au/cities/city-deals/darwin. 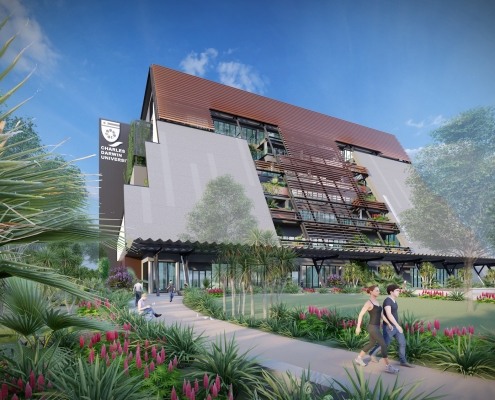